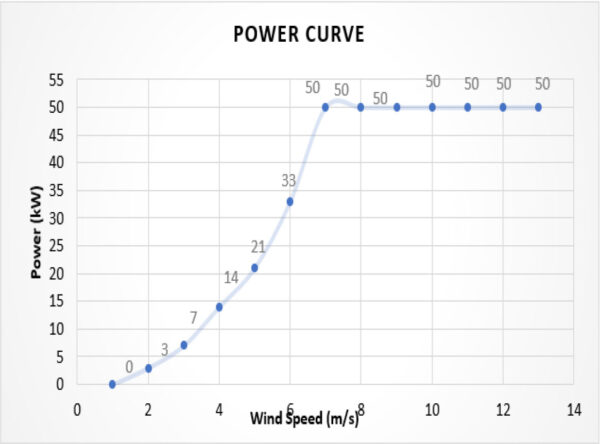 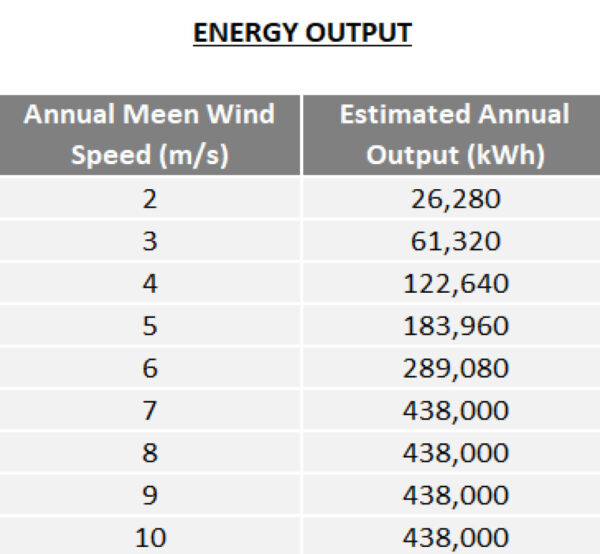 The Huia 1 is a commercially viable vertical axis turbine that does not rely on high wind shear but rather air pressure as with a yacht’s sail. The total area of the wings is 55m2, which for the first time, can seriously compete with horizontal axis turbines. 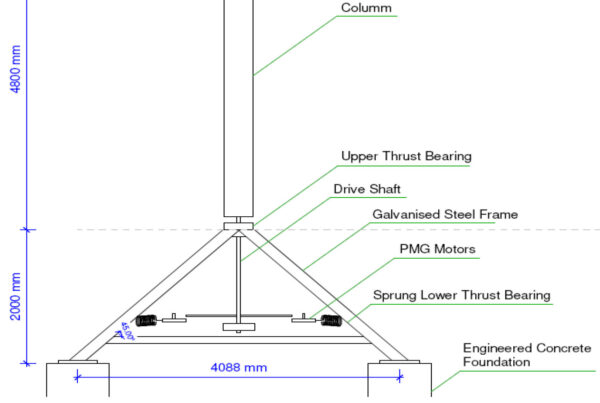 The parabolic curve of the wings plus their height and width determines the square metre area used in the calculations. Each Huia 1 comprises 2 permanent magnet generators so that from the first rotation there is power being generated. As the torque increases, 2nd generator engages until 7m/s wind speed is reached, peaking at 1MW output per day.

MPU wind turbines complies with all the principles of an alternative energy source and is therefore a prime candidate for consideration within and beyond the current market.

MPU wind turbines presents itself at a very opportune point in time with the continued decline of ‘first generation’ wind turbines and associated gains of global government subsidies.

Finally, there is a huge discrepancy in capital costs between the Huia 1 and horizontal axis turbines as well as the fact that MPU wind turbines can be operated as ‘portable/mobile’ units.

It is the intention of the Company to manufacture in Ruakaka, New Zealand and supply Platinum Power to where discussions have taken place.

The calculations for the Huia 1 power generation plant is based on an average of 7m/sec which will deliver up to 50 KW/hr, which can be stored or sent to grid.

The Huia 1 is capable of displacing greenhouse gas emissions equivalent to 300 acres of forest each year.

MPU wind turbines rely on it’s unique combined ‘racing sail’ and ‘aerofoil’ design to deliver the highest torque per square millimetre generator. The PMG motors incorporated is based on the standard torque/joule equation as per any and all PMG motor principles.

The overall design of MPU wind turbines is not just unique but packaged to encourage an engaging, positive and pleasing public response. It certainly has the “wow” factor and will readily be publically accepted as there is no “threatening” aspects to the design nor function.

Horizontal axis turbines need large and heavy rotors to produce substantial quantities of power, and because of this the wind speed needed to keep them moving is high. Areas with low wind speed are suitable for MPU wind turbines and they can produce more power from the lower wind speed areas.

There is no getting around the fact that horizontal axis turbines are noisy when they are in full flight. MPU wind turbines do not suffer from this and the Huia 1 quietness means it is more suitable for ‘suburban’ installations. Even in gale force winds, MPU wind turbines are almost soundless with no visible vibrations due to the sprung lower thrust bearing taking gust impact.

The following diagram illustrates the difference in air pressure:

The wind’s law of the 2nd power:

Horizontal axis wind turbine blades are designed to capture the kinetic energy from high wind speeds, whereas a low to mild wind blowing over a sail causes a difference in air pressure (x 9) that provides the lateral thrust propulsion.

The aerodynamics is achieved with the same ‘cut’ as a racing sail but where the inside area is convex and the outer concave thus allowing for the optimum under-camber on the thrust face and maximum angle of attack or tilting of the leading edge of the sail (inclination). The airfoil effect has good depth thus allowing for maximum lift (sideways) of the sail through its lateral axis.

In ‘basic forces’ modules it is stated that when an aircraft is moving through the air, (In this case, the MPU sail wings) the consequent pressure changes or the aerodynamic reactions to its motion are acting at every location on its surface.

Formula for calculation of lift from the wing:

The formula is an approximation of the lateral thrust from the wing design. At any one time, the aerodynamic reaction will vary over the span of the wing but the optimum under-camber on the thrust face and maximum angle of attack or tilting of the leading edge of the sail (inclination) works exceptionally well in tandem with the racing sail design.